Today is a good day to mix things up from the normal format and talk trading, both with practical talk and some philosophizing.

Days like today are full of noise.  You will find people all over social media freaking out, beating their chests about calls they did not actually make and over-reacting to normal market fluctuations.  Ignore all of it and focus on methodically analyzing the market.

First let’s put things into perspective.  SPY was down a whopping .6 percent today (yes, that sentence is dripping with sarcasm).  IWM was down 1 percent and QQQ was down .1 percent.  It felt bigger because they were up intraday, so the intraday fall was greater, but at the end of the day we have normal pullback moves that may mark a slight correction or pullback.  This is a *good* thing if you are looking to build solid swing positions.  It gives us better high probability entries on our next trades.  The entries that we have been making over the past week or two have not been quite as high probability because of the overbought nature of the market.

If you have been stopped out of a few positions, big deal.  That is why we only risk .2-1 percent per trade (sometimes more for small account holders).  No single trade, or even group of trades, should make much of an impact on your portfolio.  These stop outs should not cause you pain.  My philosophy is to take plenty of shots and not worry when you get stopped out for small losses.

We have been expecting reversal days.  We knew there were  plenty of distribution days over the past few months.  We could “feel” the overbought nature of the market.  So why do we continue to make long trades?  Simply put, even when you know, you don’t know (anybody who says otherwise is lying).  It’s tough to make the exact call, and markets can go up longer than they should.  Don’t just focus on these stop outs.  Remember that you made money on the way up, so these stop outs are well worth the 2-5X gains you made on the way up.

As I said, when you know, you still don’t know.  However, you do know how to protect yourself and profit from your analysis.  We continued to trade the way up, but we did not chase.  We held back on some setups so as not to get overexposed.  And we hedged by taking some early profits in YELP and CSIQ (I would never have exited in a market that was not overbought), and when Oil became insanely overbought, we used the setup to hedge with a short play (the DUG trade).

Though some members have been stopped out (some of you are setting stops way too tight, as if you are daytrading), I have not been stopped out of any of the long positions, and FB, CSIQ, LNKD and WOOF still above entry levels.  Yesterday’s DUG entry is on fire, already up 5 percent. 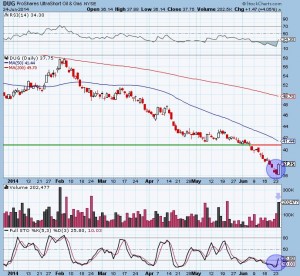 Today I entered QID at the end of the day (you should have received an alert-if not contact swing@bullson.ws).  By going long QID, I am effectively shorting QQQ with leverage.  At highs, if you see a day where the market was up into new high terriroty, then dives at the end of the day, printing a “long tail” or hammer” candle, it often signals a short term reversal, and sometimes a bigger reversal.

Many watch this candle and like to enter the following day on confirmation that the candle holds.  I like to get in at the end of the trading day, before confirmation.  Often if you wait for confirmation a good chunk of the move is gone, especially if it ends up being a shallow correction.  By now you should know that my trading philosophy is to take stabs that could lead to small losses, so I’m not worried about being wrong and getting stopped out.  Over time, my 2-5X gains will more than make up for the small losses. The entire focus list and market leaders are healthy, with no trading ranges broken.  I am content right now to have two short positions (inverse longs QID and DUG) and will wait for pullbacks in the focus list for long positions.  I am still holding FB, CSIQ, LNKD and WOOF, and will continue to hold until stops or targets are hit.

GOOGL is added to the focus list.  It looks like it’s formed a W bottom and is starting to pullback.  I had an entry level at $570-572, but might wait for a deeper pullback if the market seems to be correcting. I will stay up late tonight to answer any questions you may have about what is in today’s report.  New subscribers, please make sure to review older reports to see what we have been trading prior to today.  Leave any feedback/comments in the comments, via email (singhjd1@aol.com) or twitter (twitter.com/PaulJSingh)

Please read the post 23 Laws of the Part Time Swing Trading the Market Speculator Way.  It is important that you know these rules if you trade off the Report.